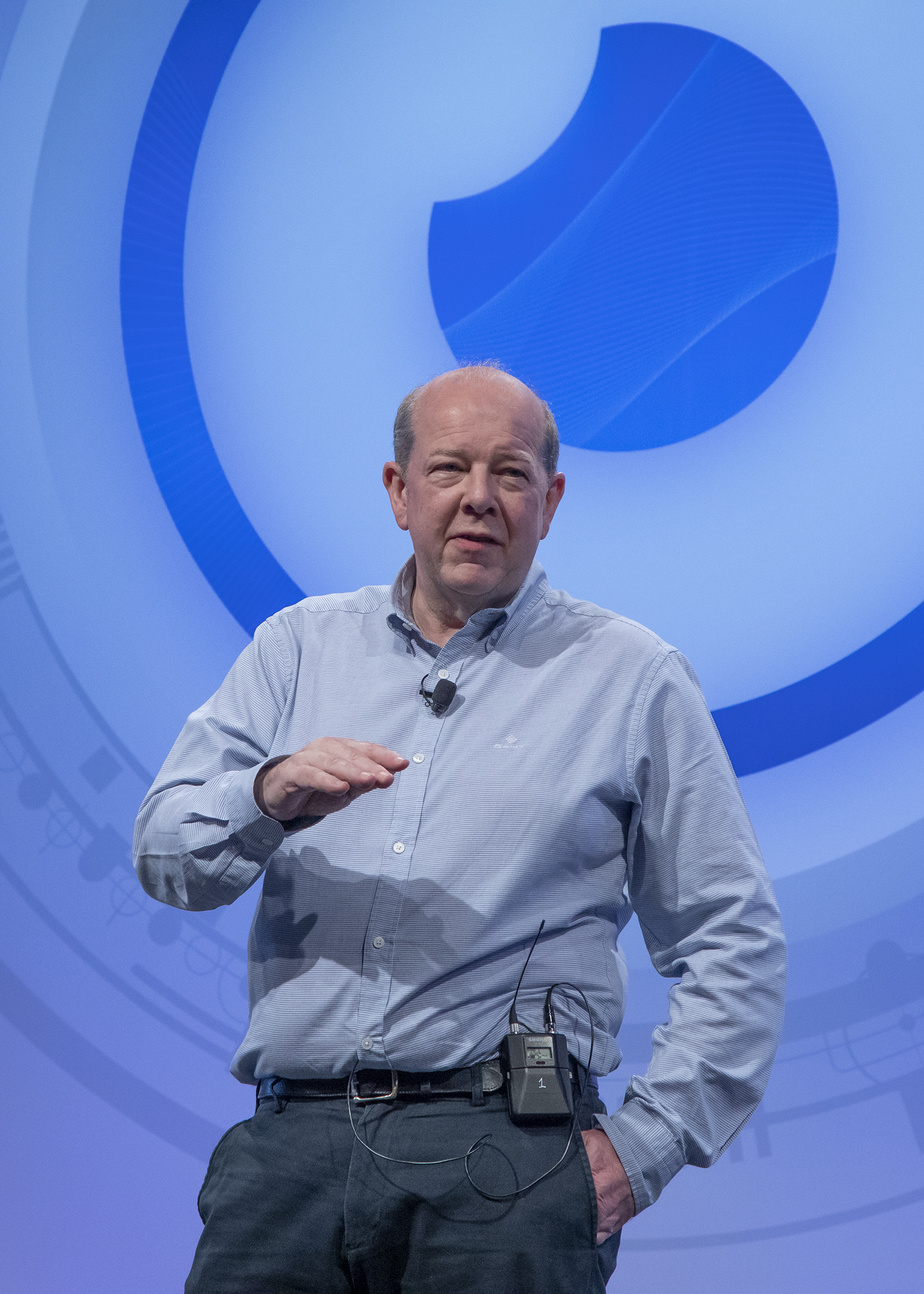 It was fifth time lucky for Optix Software as the York-based business was finally able to stage its ever-popular user group conference in Wales this month, abiding by the nation’s Covid-19 rules and regulations.

One of the first optical events to be postponed back in March 2020 as the pandemic took hold, the Optix Conference was rescheduled no less than five times over the past 15 months.

But where there’s a will there’s a way – and so from 15-17 November, Optix managing director, Trevor Rowley, welcomed 453 delegates to the Celtic Manor Resort to talk software shop, private-only practice, integrating audiology, personal and business growth, goal setting and more. 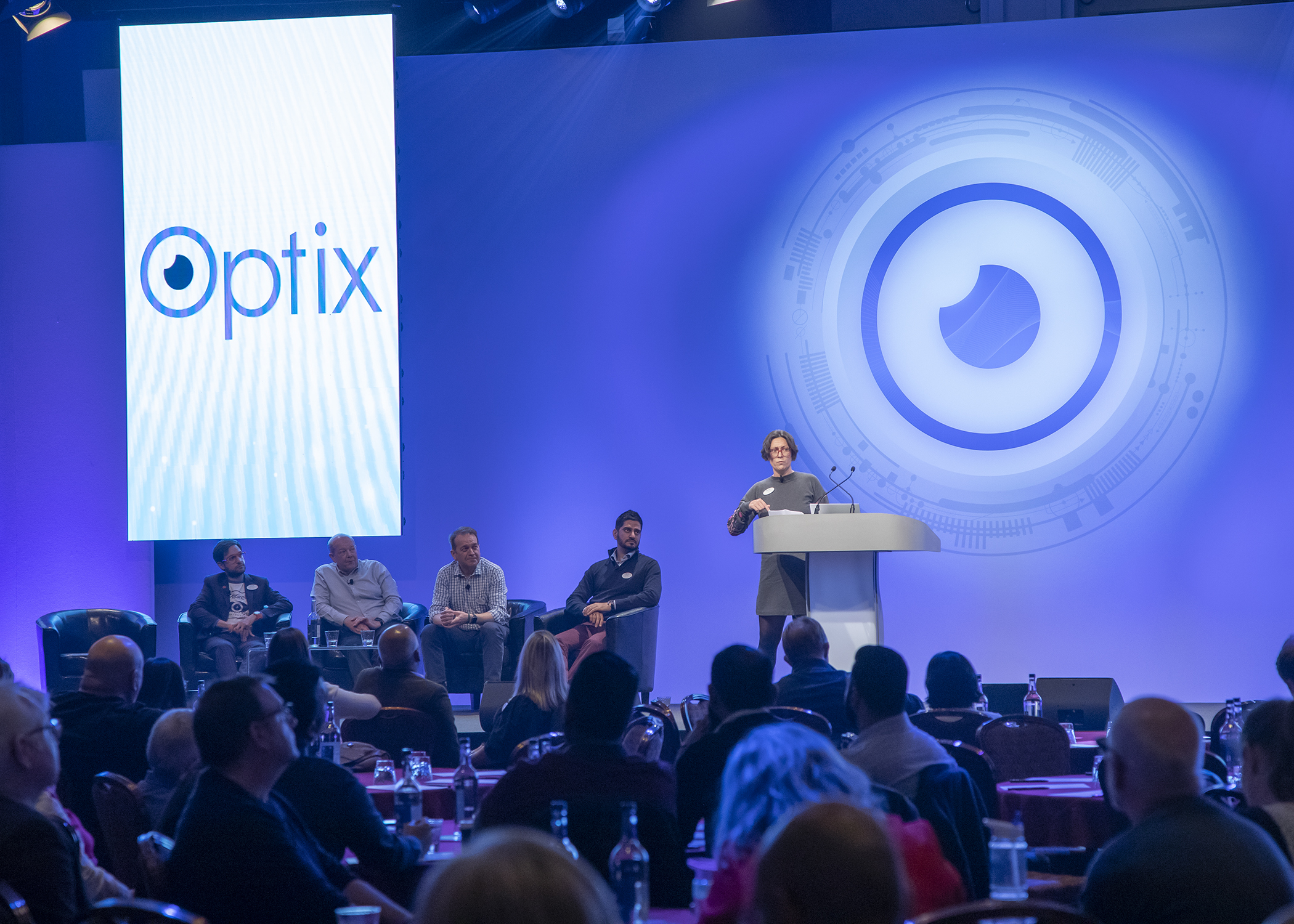 DO Kate Fenn discusses her experiences of the private-only model

High on the agenda this year was the much-discussed topic of leaving the NHS to fly 100 per cent private. The opening day saw four Optix customers take to the stage to share their experiences of terminating their NHS contract and moving to a 100 per cent private eyecare model. This was followed by an open floor discussion.

Among the panellists was dispensing optician, Kate Fenn, an ABDO local lead in the East Anglia region. Kate is one of four directors at Norwich-based Coleman Opticians Hearing and Vision Centre, which has gone from a base of 90 per cent NHS patients to zero NHS patients.

She said: “Put simply it has been hard work; not all patients have been happy and we have sadly had to make some redundancies. Every day, it seems the team are faced with a new dilemma to the private model. However, none of us feel any regret about our decision.

“As I said on stage, it’s not all been hearts and roses but we truly believe we are offering our patients the standard of care we would want our grandparents to receive. Coming from such a heavy NHS background, I cannot convey enough that if we can do this – anyone can.” 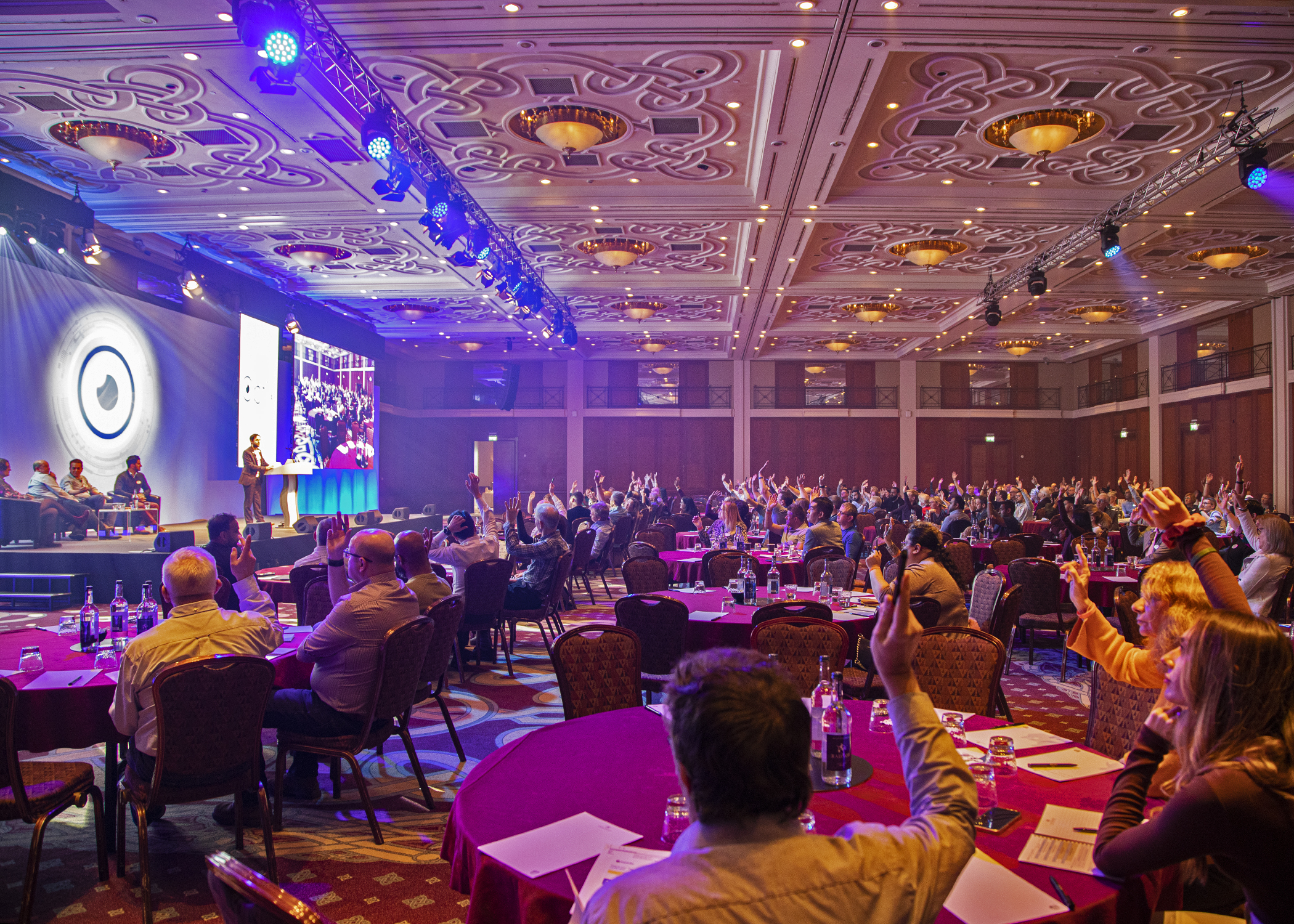 Of the conference in general, Kate enthused: “The fact that this was my fourth conference tells you everything you need to know about it; it’s a great mix of education, networking and lots of fun. I can honestly say I have never come away from one having not learnt something.”

Belfast optometrist, Eavan Kennedy, described the panel discussion as “very thought-provoking” – saying that the key message for delegates was that demographics had less to do with the potential success of the private-only model than most practitioners might think. “Practices with a large proportion of NHS patients – say more than 80 per cent – are making a success of it. Dentistry did it years ago, why not optics?” she said.

Another delegate revealed that her mindset had been changed about going private only after listening to the day’s presentations and Q&As. There is an ever-growing band in the independent sector, it seems, willing to gamble on a new future outside the NHS. 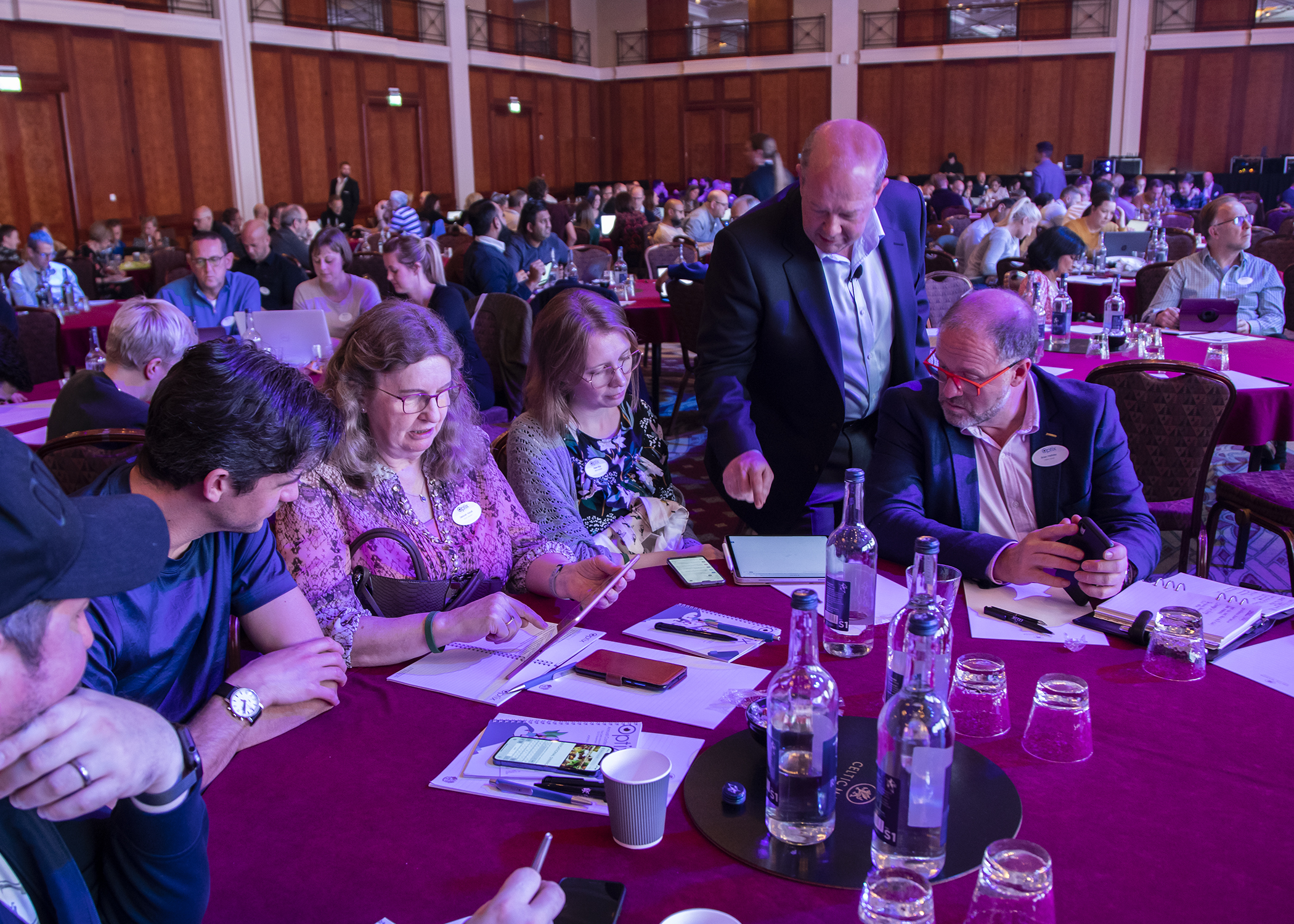 Debates around the future of the profession went hand-in-hand with a focus on the future of Optix, with a pilot of Version 2 now rolling out across a number of customer practices alongside Version 1. A live demonstration gave delegates the chance to see and road test new functions of the software’s rebuilt infrastructure.

A big change with Version 2 is that it will operate across multiple platforms, including on an Apple Mac. This means that front-of-house staff will be able to manage patients ‘on the move’ via an iPad. Version 2 has a new diary view with extra filters for practitioner availability, and works in tandem with the audiology side of the business via the new Audix audiology software.

A new booking-in systems was still being fine-tuned in consultation with customers – including receptionists. “This is the future of our business,” said Trevor, “and it’s important we get it right.”

As well as catching up on progress with Audix audiology integration, delegates heard about other new features such as Stocktake and MySight 2, which allows patients to look after their own appointments. During breakout sessions, delegates took a deep dive into the various features and functions with the Optix support team. 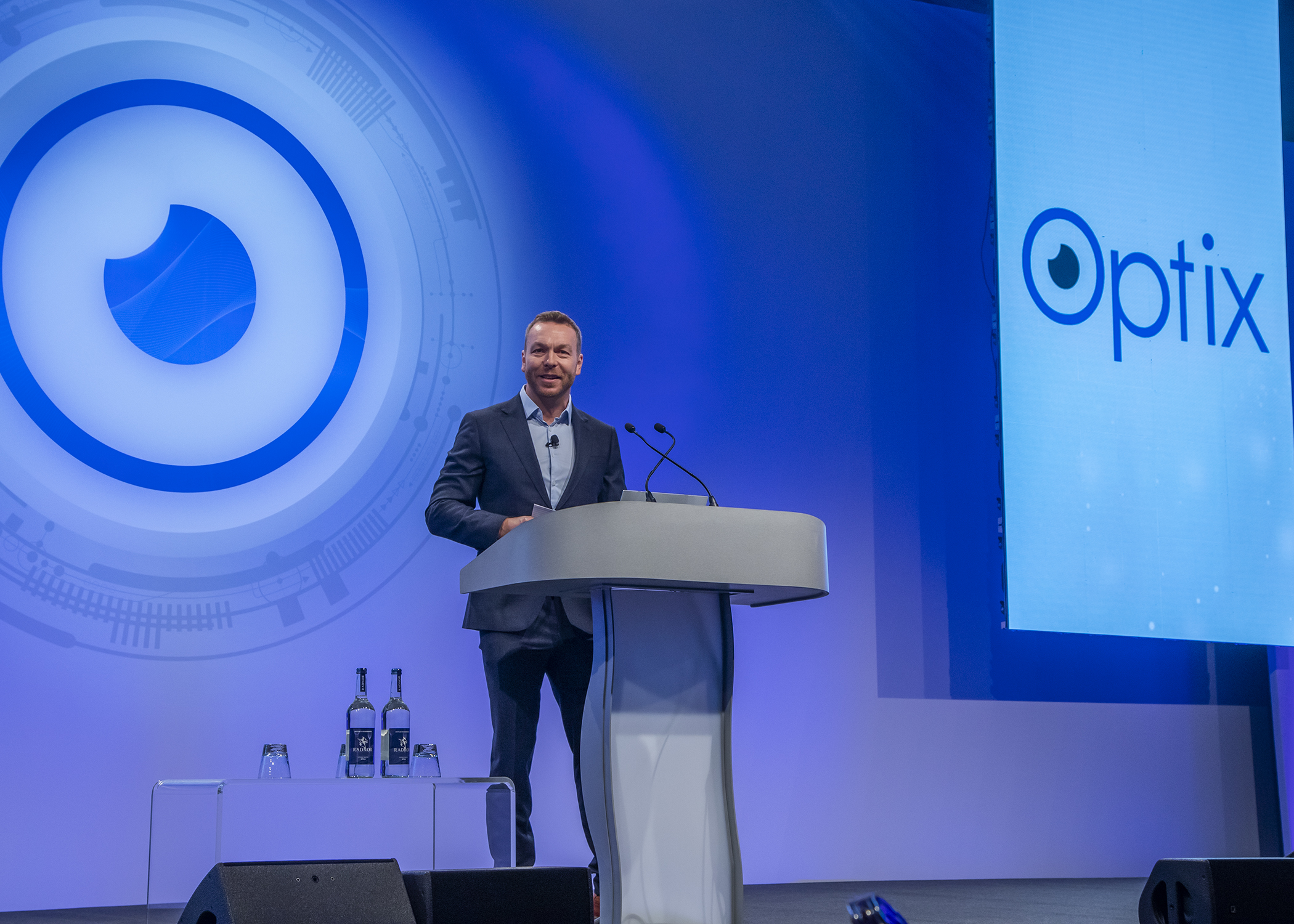 The Optix Conference is famed for the calibre of its guest presenters – and 2021 was no exception. Broadcaster and ‘national treasure’, Gyles Brandreth, played host once more – introducing a stellar line-up of inspirational speakers including Olympic athlete Sir Chris Hoy MBE, adventurer Duncan Slater, and Deborah Meaden of BBC Dragon’s Den fame. To close the event, Piers Morgan regaled the audience with anecdotes about his checkered career to date.

A man who needs no introduction, Sir Chris Hoy addressed a packed conference hall – charting his meteoric rise on the cycling track to become one of Great Britain’s most successful Olympic athletes of all time, with six gold medals and one silver. He had more than a few wise words to impart about achieving goals – whether it be in business or in one’s personal life. 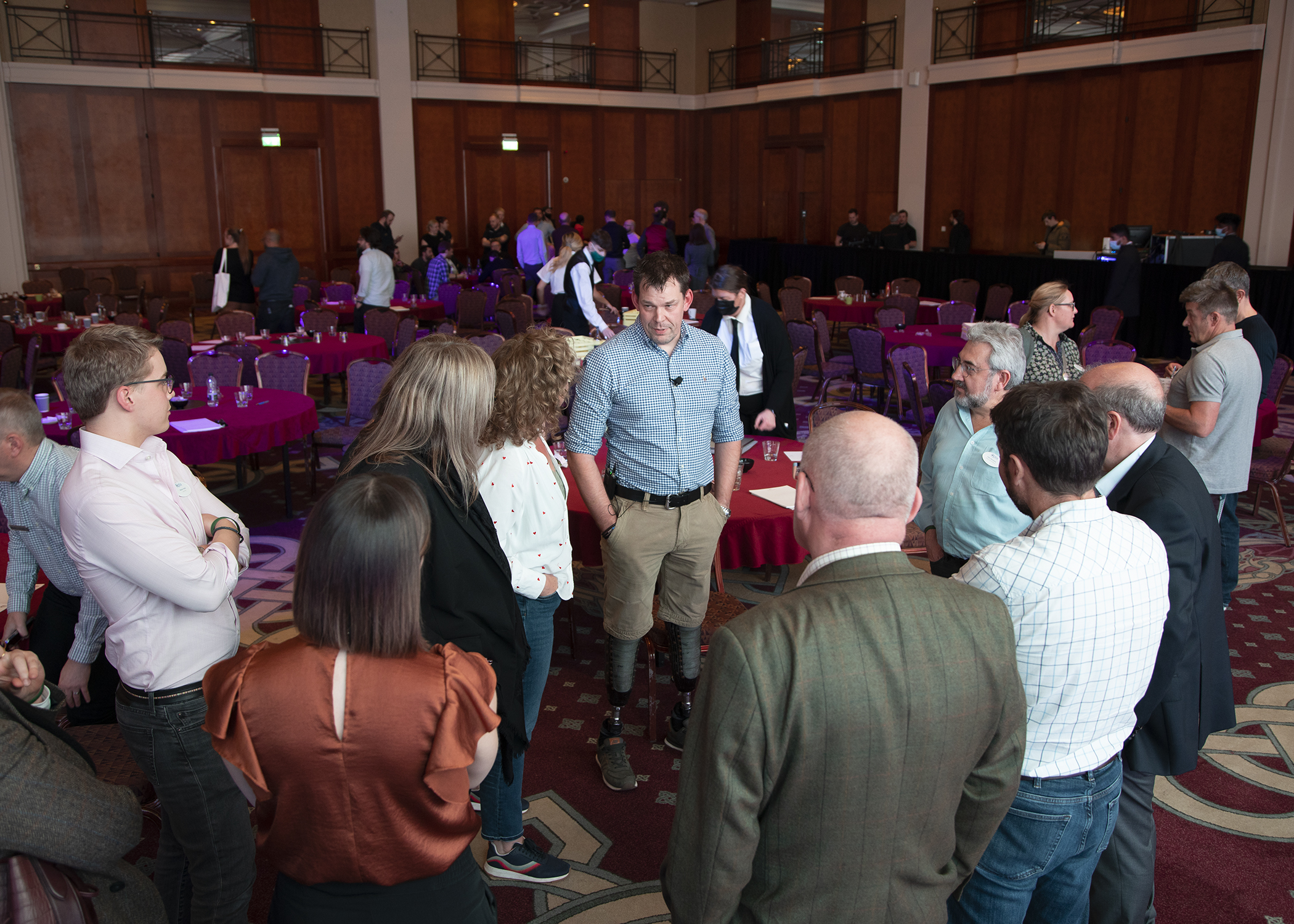 Duncan Slater chats with delegates after his presentation

Later, delegates heard from Duncan Slater – an RAF veteran who became the first double amputee to race to the South Pole with the Walking with the Wounded charity, and the first double amputee to compete in the Marathon Des Sables in 2017. Duncan shared poignant details of his personal battles and tribulations, and spoke about the critical work of the charity that supported him and that he now represents as an ambassador. 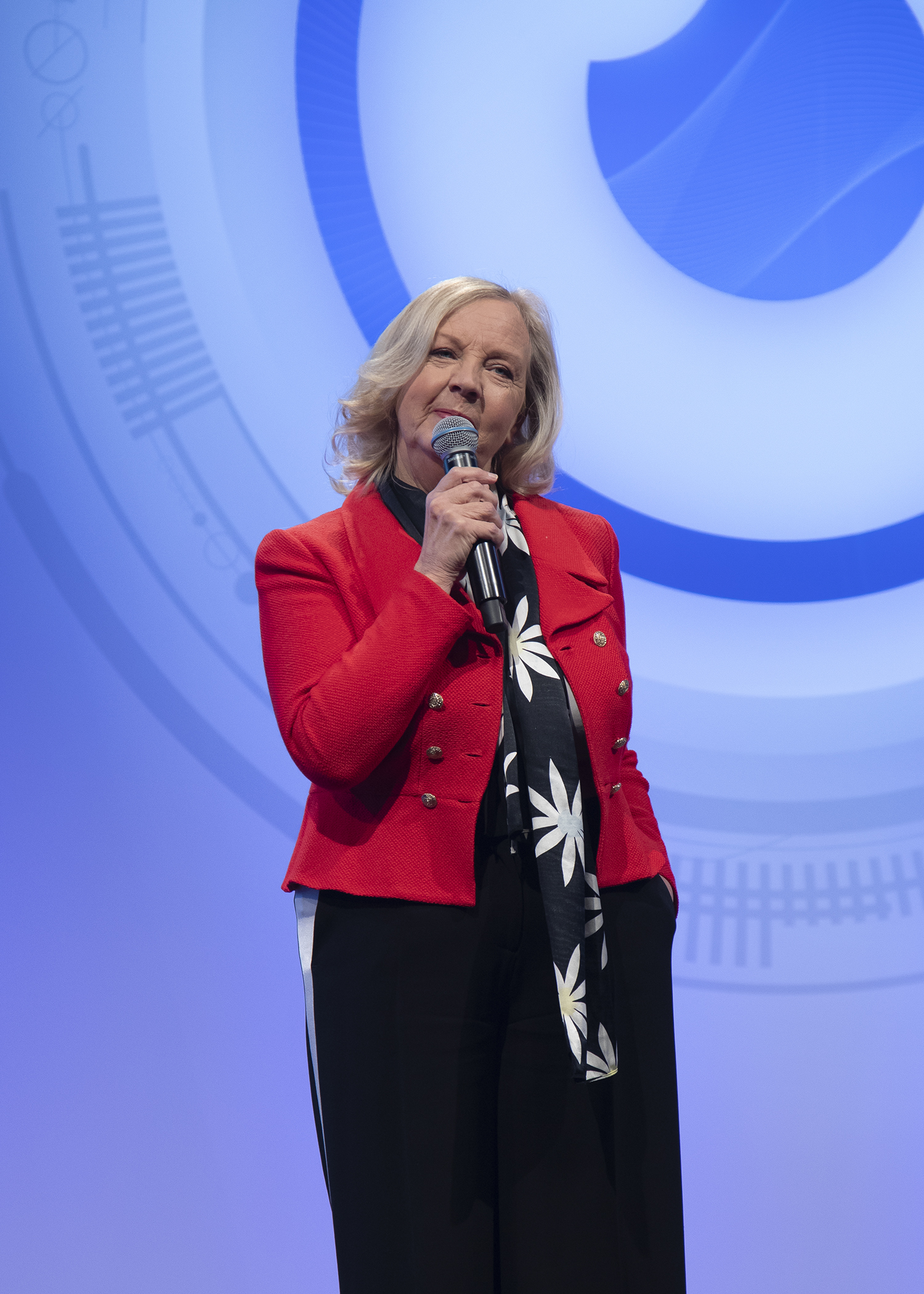 Delegates were equally keen to hear from businesswoman, Deborah Meaden, who launched her own business at a young age before becoming a successful entrepreneur and serial investor. She also spoke about her involvement in the ethical and fair practice movement.

Earlier in proceedings, ‘professional goal setting researcher’ and award-winning speaker, David Hyner, talked about how to get ahead in business by ditching Smart goal principles for the secrets of Massive goal success. 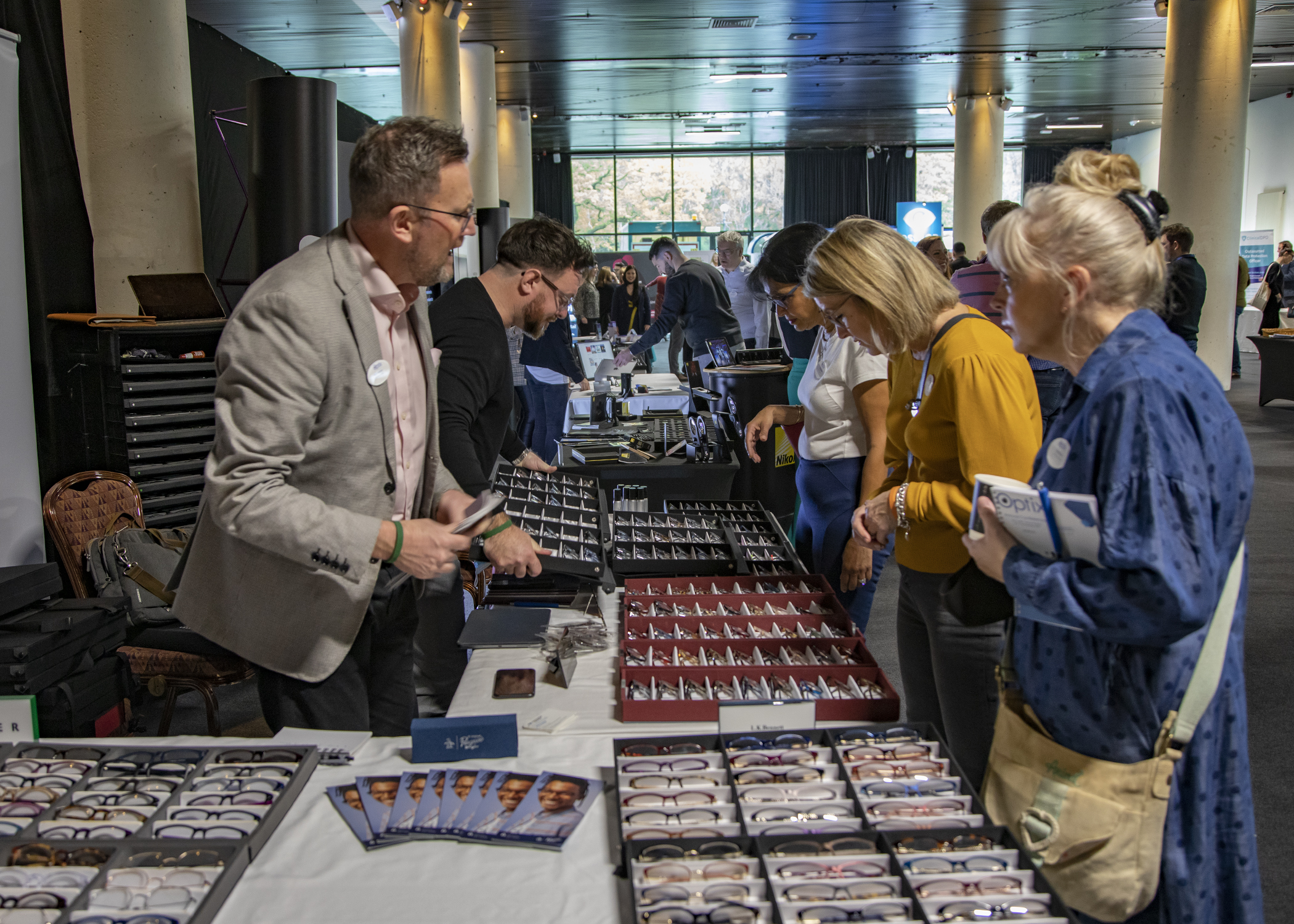 Catching up with Continental Eyewear

Exhibitor Peter Reeve, managing director of Stepper UK, said afterwards: “Optix is one of Stepper’s preferred events. In addition to meeting and discussing commercial developments with existing business partners, we are encouraged by how the mutually beneficial sharing of good ideas amongst Optix delegates allows us to meet new faces.

“Through the melting pot of best practice encouraged at Optix, the event always delivers Stepper new customers, most often from delegates who may not have otherwise considered Stepper or understood the benefits that working with a brand like ours can deliver, without shared peer experience,” Peter concluded. 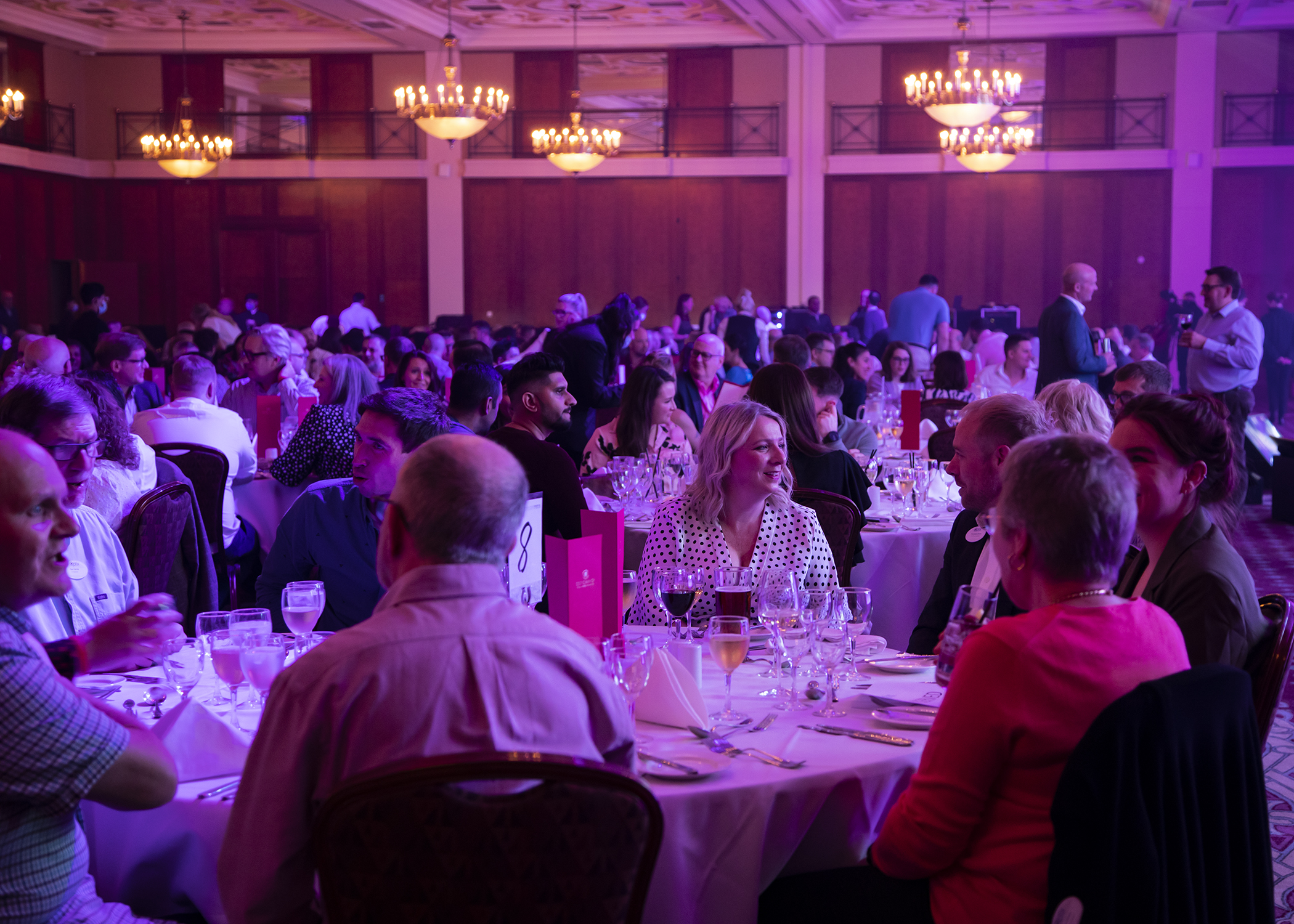 Enjoying some down time

A full social and networking programme included an informal dinner with comedian Alistair McGowan as after-dinner speaker, and a gala dinner with wine tasting and entertainment. During the evening, Optix customers, guests and sponsors donated £31,172 to Walking with the Wounded, which Optix will match pound for pound.

“With Gift Aid added to applicable donations, we expect the final amount received by Walking with the Wounded to exceed £68,000,” said Trevor. “This is an incredible figure and a testament to Duncan Slater, who I’m sure all will agree is an amazing person.”

The next Optix Conference will take place from 13-15 March 2023 in partnership with Topcon, and the speaker line-up will be announced next summer. A Topcon University clinical conference will run on 11 and 12 March, with plans to bring in globally-renowned speakers. 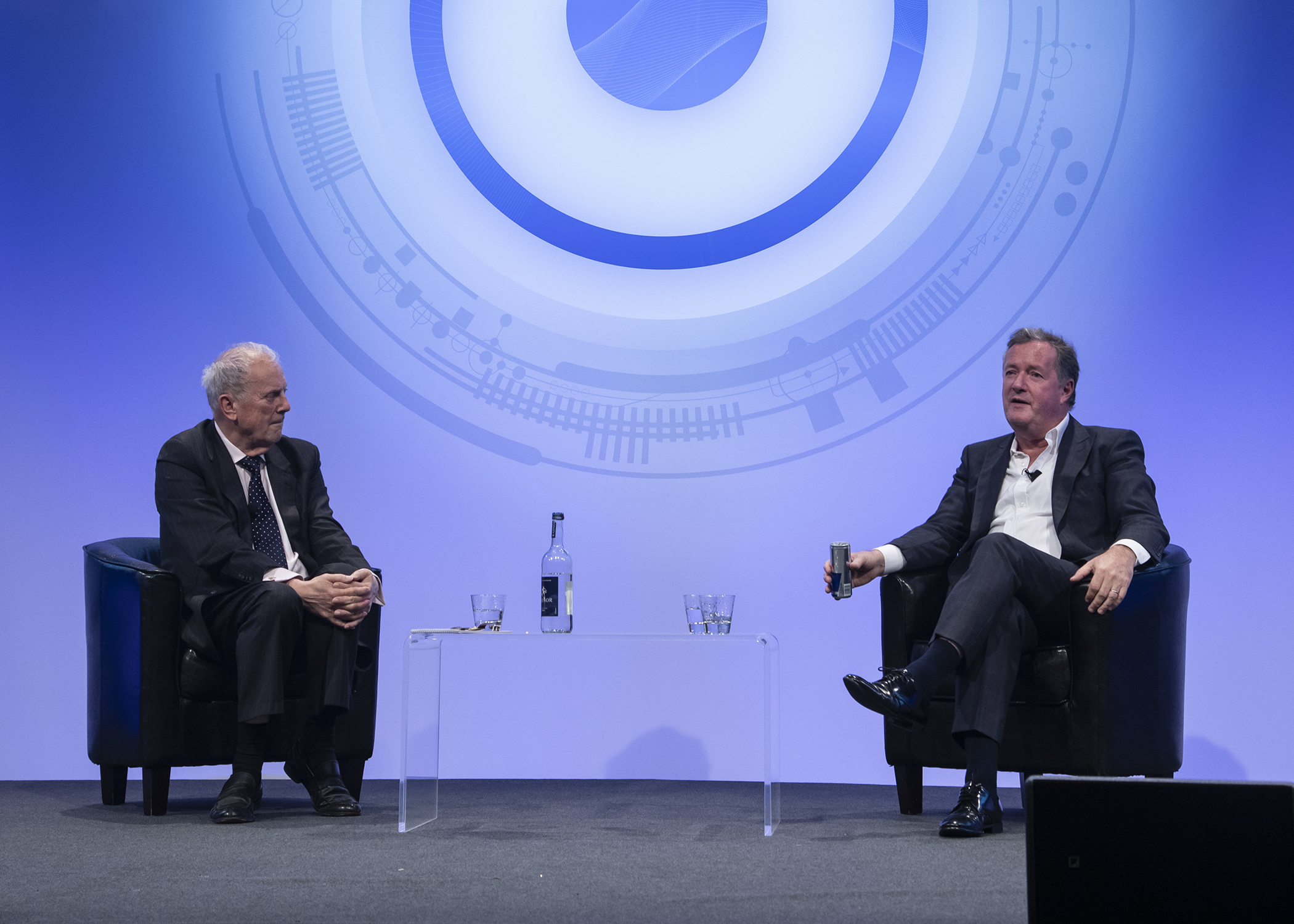