Many risks factors may play a part in a patient susceptibility to developing DED. Some have long been considered provocative, but research on the issue has been often contradictory or even inconclusive.

The prevalence of DED has been confounded by a lack of standardised definition and criteria used in diagnosis. The epidemiology subcommittee of TFOS7 reported on prevalence, incidence, risk factors, natural history, morbidity and questionnaires reported in epidemiological studies of DED.

Figures vary wildly depending on use of signs only, symptoms only, or a combination, also variation in what signs or symptoms are used in diagnosis. The variance in prevalence found for symptomatic DED with or without signs ranged from five per cent to to 50 per cent7, when based on signs this was seen to be higher and variable at up to 75 per cent in certain populations. Although there are gaps in research across the globe and data for the southern hemisphere is scarce, it has been recognised that being of an Asian background is a consistent risk factor.

This wide range of estimates is likely to be due to a number of variables such as measuring techniques employed, reproducibility of tests, as well as the interpretation of the results. Several modifiable and non-modifiable characteristics of the populations such as age, sex, ethnicity, environment, medications and lifestyles may also have a part to play in these variations.

Age, sex and ethnicity are also recognised as unmodifiable risk factors with women having a higher prevalence than men and signs and symptoms increase with age.

(It should be noted inconclusive does not suggest that this is not a risk factor, but rather that  more data is required to confirm as probable or consistent.) 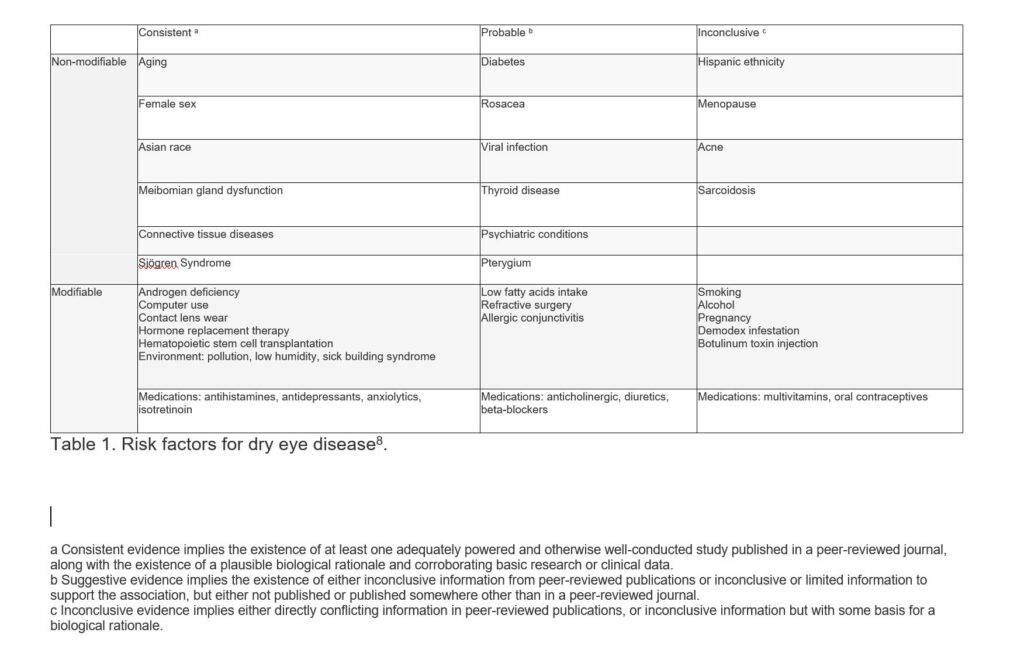 Non-modifiable factors are for us to be aware of for help in making next steps and educating the patient, but clearly, by definition, not all factors can be altered. However advice can be given when it comes to reducing risk in the modifiable areas.

Conversations may centre around use of VDU screens and digital devices, local environment, humidity, pollution, fresh air and natural lighting and hydration and diet, in particular intake of essential fatty acids (EFAs). The ratio of Omegas 3 and 6 in the western diet is recognised as being provocative of dry eye with the ratio of omega-6: omega-3 being as high as 15:1, whereas an ideal ratio is generally considered to be 4:19.