Uveitis is a less common eye condition but is included here due to its serious implications.

Uveitis is an inflammation of the uvea – the middle part of the eye. There are different forms of uveitis, depending on which part of the eye is involved, with iritis being the most common.

Anterior uveitis, also known as iritis, accounts for 75% of cases and affects the iris and ciliary body.
Intermediate uveitis affects the peripheral retina and blood vessels just behind and around the ciliary body.

Posterior uveitis affects the layers posteriorly such as the retina and choroid. Also referred to as chorioretinitis.

Uveitis is considered to be an important cause of visual impairment in the UK and is thought to affect 2-3 people in every 10,000 in the UK. It is usually unilateral although can be bilateral.

• First occurrence is usually sudden, however subsequent episodes can come on more gradually.
• Dull aching pain in or around the eye
• Photophobia
• Reduced or cloudy vision
• Floaters
• Lacrimation
• Aqueous cells and flare as viewed on the slit lamp
• Keratic precipitates (KPs)
• Non- reactive or constricted pupil 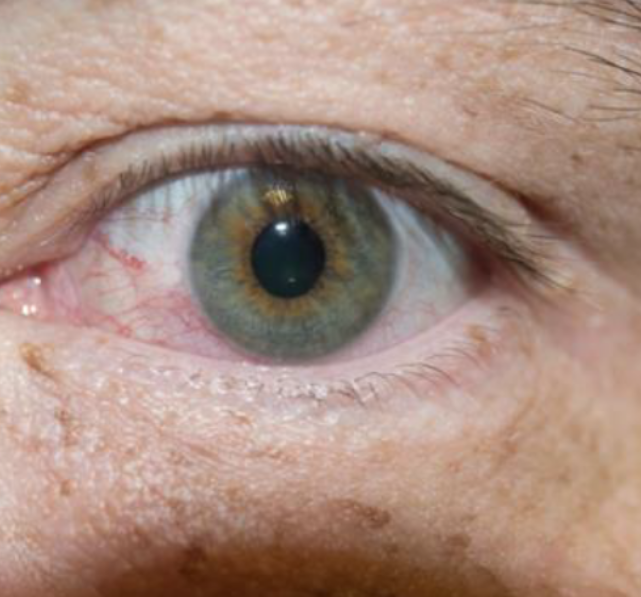 Patients with anterior uveitis /iritis may present with just a slight red eye and therefore detailed questioning (particularly around photophobia and discomfort) should always take place. 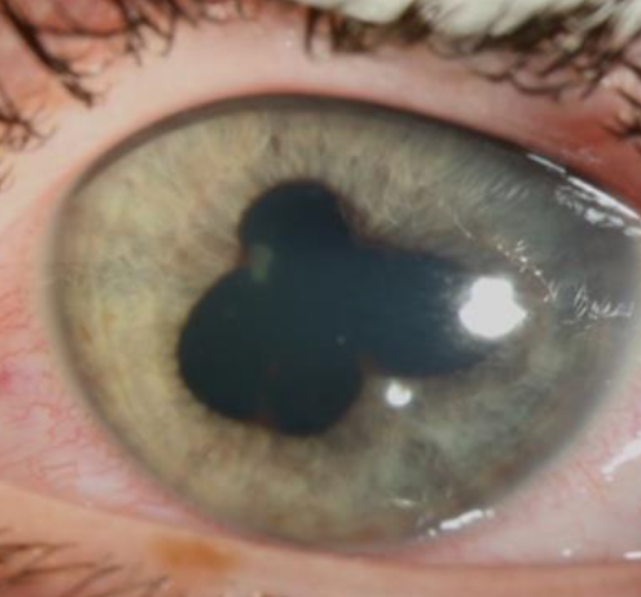 Sometimes an irregular pupil can be seen as the iris can stick to the lens beneath it. This picture is taken with dilating drops applied which has caused the pupil to become more distorted.

• It normally occurs spontaneously although there may be a history of other autoimmune inflammation such as such as sarcoidosis, ankylosing spondylitis, or Crohn’s disease, but often no cause can be identified
• External injury
• Infection- bacterial and viral
• Parasitic infection such as toxoplasmosis
• Fungal infections
• Post ophthalmic surgery
• Stress may be a risk factor
• Smoking is a risk factor

• Uveitis is an emergency/urgent referral based on your local protocols.
• Topical steroids to reduce inflammation
• Topical cycloplegic to dilate the pupil, reduce pain and stop adhesion to the lens
• If the cause is believed to be an autoimmune reaction then medication can be prescribed 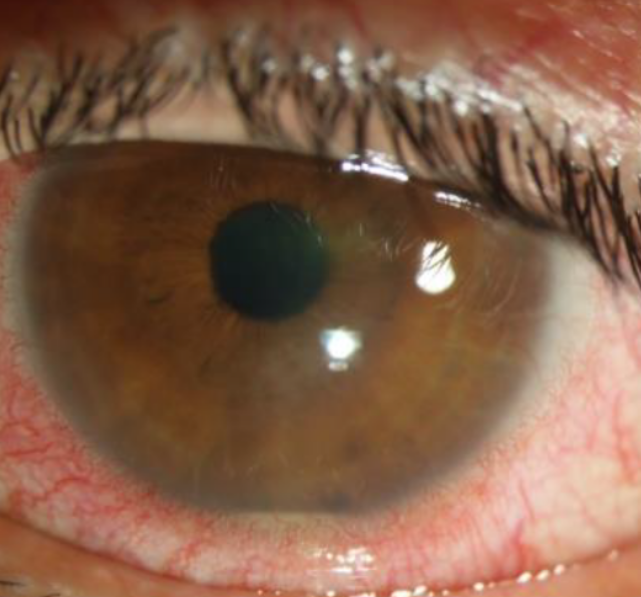 The red eye can be quite pronounced. The key thing to notice in this picture is a small line at the bottom of the iris. This is hypopyon (inflammatory cells settling in the lower part of the anterior chamber) and is a significant finding and prompts immediate referral.