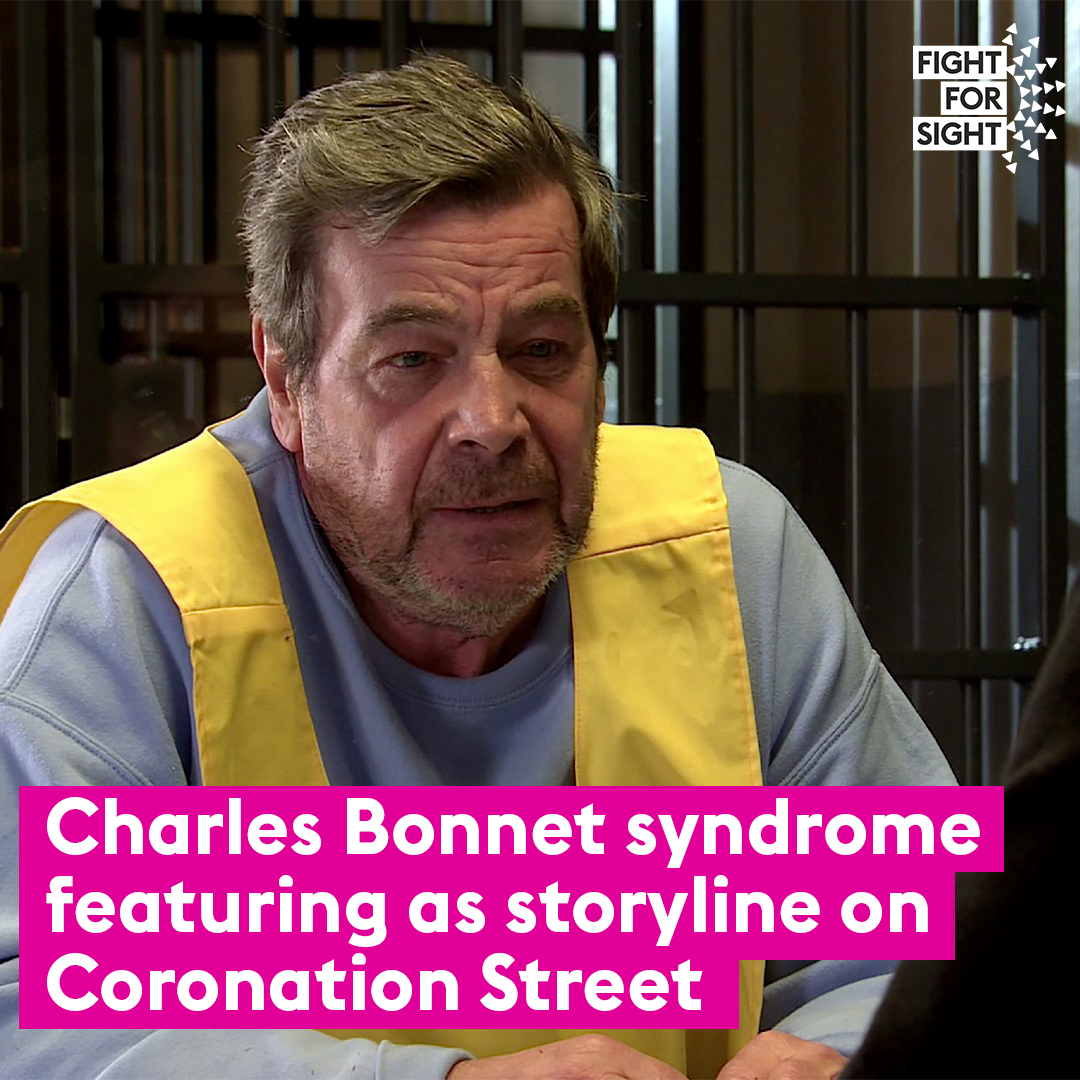 A survey of people with sight loss by Fight for Sight has found that almost one in five respondents with sight loss (19 per cent) – and half of those with severe sight loss – have experienced visual hallucinations.

Known as Charles Bonnet Syndrome (CBS), visual hallucinations are a common but little-known side-effect of sight loss. They can be very clear, detailed and consistent and can happen to people with good mental health.

CBS is currently being featured as a storyline on Coronation Street. Character Johnny Connors has been experiencing hallucinations in the last few weeks on the programme as his eyesight slowly deteriorates. Johnny was diagnosed with CBS on Monday night’s episode (15 February).

Fight for Sight is urgently calling for more funding to be invested in vital research for CBS, which can sometimes be mistakenly confused with the onset of dementia.

Of those surveyed by the charity who have experienced visual hallucinations, 20 per cent said it impacted on their mental health, while four in 10 said it affected their ability to go about their daily life. Thirty-five per cent reported that their hallucinations had got worse since the onset of the pandemic.

There is currently not enough data to show how many people in the UK have CBS, the charity stated, but it is estimated to be hundreds of thousands with some experts believing it to be as many as one million.

Karren has degenerative myopia and glaucoma. She first realised she was experiencing CBS about four years ago, after a period of significant sight loss – and her sight has been deteriorating ever since.

Karren said: “I will be walking down the street and I’ll see a small dog in the road – to me it will be a very clear image of a dog. I’ll start to panic because I think the dog might be in danger of getting hit by a car, and it’ll take a few seconds for my brain to click that there’s no dog, I’m having a hallucination. I am mindful of not going outdoors and navigating traffic if I am tired because this can make my CBS worse and impact on my judgement when crossing a busy road or getting out of the way for cyclists.”

Fight for Sight, together with partners Blind Veterans UK, Esme’s Umbrella and Health and Care Research Wales, is funding two research projects at Cardiff University and University of Oxford to investigate the cause of the visual hallucinations associated with CBS, with the hope of eventually finding a cure.

One study will investigate the possibility that peripheral (‘side’) vision is more ‘suggestible’ than central vision. While the second study will use a special type of MRI scan to measure the levels of chemicals in the visual areas of the brain to see whether they are abnormal in people with CBS.

Chief executive of Fight for Sight, Sherine Krause, said: “Charles Bonnet syndrome is a complex and devastating side-effect of sight loss. It is an area of research that little is known about and has largely been neglected, so we are very pleased to fund these two important research studies.

“With a better understanding of the causes of CBS, we will be one step closer to developing a treatment and cure for the condition. However, more investment in eye research is needed to ensure we can continue transforming the lives of people with sight loss.”

Fight for Sight has launched a fundraising appeal asking people to donate to cutting-edge research into CBS. Find out more about their research and how to donate on Fight for Sight’s website.